Blida Department of English: Free Stand to Stand Free
Hello dear mate, we'll be pleased to have you joining our community, so would you please register. You have to identify yourself to admin or to the moderators to be able to join the hidden group where you can see all the forum material.

The best story ever told on film

The best story ever told on film

Fear can hold you prisoner. Hope can set you free.

It's an amazing, breath-taking movie about two imprisoned men bond over a number of years, finding solace and eventual redemption through acts of common decency.

yeah..you guys saw how long that guy spent on digging his way out to freedom!

This movie is never boring to watch again and again..

Yeah ! it took him ages to dig his way out! The only thing that's kept him going and going is HOPE !! I love this Movie

The Road (2009)
Based on the book of Cormac Mccarthy
A father and his son walk alone through burned America. Nothing moves in the ravaged landscape save the ash on the wind. It is cold enough to crack stones, and when the snow falls it is gray. The sky is dark. Their destination is the coast, although they don’t know what, if anything, awaits them there. They have nothing; just a pistol to defend themselves against the lawless bands that stalk the road, the clothes they are wearing, a cart of scavenged food—and each other.

The Road is the profoundly moving story of a journey. It boldly imagines a future in which no hope remains, but in which the father and his son, “each the other’s world entire,” are sustained by love. Awesome in the totality of its vision, it is an unflinching meditation on the worst and the best that we are capable of: ultimate destructiveness, desperate tenacity, and the tenderness that keeps two people alive in the face of total devastation. 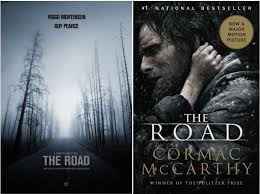 Atonement (2007) the movie
Based on the book of Ian McEwan
Atonement is a 2001 novel by British author Ian McEwan.
The title refers to the process of forgiving or pardoning a transgression, and alludes to the main character's search for atonement. An upper-middle-class girl in interwar England - who aspires to be a writer - makes a serious mistake that has life changing effects for many. Consequently through the remaining years of the century she seeks atonement - which leads to an exploration on the nature of writing itself.
It is widely regarded as one of McEwan's best works and is one of the most celebrated and honoured books of recent years. It was shortlisted for the 2001 Booker Prize for fiction, an award he had already won for his previous novel, Amsterdam. McEwan utilises several stylistic techniques in the novel, including psychological realism. The book was later adapted into a BAFTA and Academy-Award nominated film of the same name, starring James McAvoy and Keira Knightley, and directed by Joe Wright in 2007. 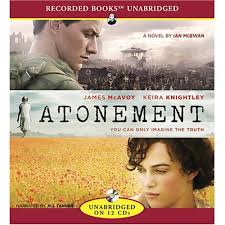 I loved the movie Atonement, its WOW !!!

Freedom Writers(2007) The movie
Based on the book " The freedom writers diary " By " The Freedom Writers with Erin Gruel "
We tell them :" Go to School and get education "
The Freedom Writers Diary: How a Teacher and 150 Teens Used Writing to Change Themselves and the World Around Them is a non-fiction 1999 book written by The Freedom Writers, a group of students from Woodrow Wilson High School in Long Beach, California, and their teacher Erin Gruwell. It is the basis of the 2007 movie Freedom Writers, starring Hilary Swank. The Freedom Writers Diary was made up of journals that Erin Gruwell told her students to write in about the troubles of their past, present and future. The Freedom Writers name is a pun on the name of the civil rights group Freedom Riders.
Gruwell received the inspiration to teach them using the techniques described in the book after intercepting a racist drawing from one of her students. When she compared the drawings to Nazi propaganda techniques, she drew blank stares. As a result, she assigned them to read and write about The Diary of Anne Frank and Zlata's Diary: A Child's Life in Sarajevo.
The Freedom Writers Foundation continued with exercises and philosophies similar to those used in the original class, and tracks the progress of the original and continuing classes.

U can get in touch with them here :
Freedom Writers Forum
N.B : As a friend of mine said :" because they could So we CAN".

I love this movie, its amazing ! Everybody's got to watch it

its a must lol