Blida Department of English: Free Stand to Stand Free
Hello dear mate, we'll be pleased to have you joining our community, so would you please register. You have to identify yourself to admin or to the moderators to be able to join the hidden group where you can see all the forum material.

This is an adaptation of Elizabeth Gaskell's novel North and South (1855) I adore ! 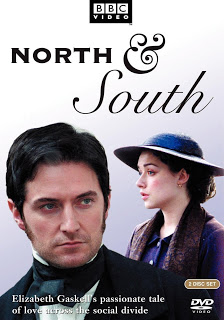 
North and South is a four part adaptation of Elizabeth Gaskell's love story of Margaret Hale, a middle class southerner who is forced to move to the northern town of Milton. 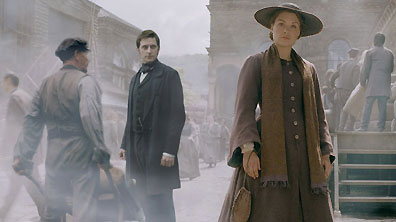 Elizabeth Gaskell's classic explores the simmering, restrained passion between two very different people who fall in love in spite of themselves.

Set against the backdrop of Victorian England's industrial north, it follows the fortunes of Margaret Hale, one of 19th century literature's most original heroines.Played by Daniela Denby-Ashe, Margaret is a privileged, middle class southerner who is forced to settle in the northern town of Milton.

Margaret takes instant offence to the town and its people. She becomes terribly lonely and hates the dirt, noise and lack of civilisation, blaming their new way of life for her mother's ailing health.Her distaste for the town and its people extends to handsome and charismatic cotton mill owner John Thornton, (Richard Armitage), whom she believes epitomises everything she dislikes about the North.

However, Margaret gradually begins to settle in Milton. Her social conscience awakens and she befriends some of the
local mill workers, learning about their poverty and workplace struggles.As events conspire to throw Margaret and Thornton
together, the two spirited characters have to overcome their repressed physical attraction for one another and conquer prejudices of class and circumstance.

It's downloading! Thank you dear sassy

Woooow i did not know that there is a movie of North and South. I have read the novel years ago, and i loove it so much especially the character of Margaret Hale. I was fascinated by her strong character. Elizabeth Gaskell ( the writer) could skillfully give a solution to the long standing conflict between masters and workers by making Margaret Hale the unifying thread that connects the two parts: as she befriends the mil-worker Higgins and the mil owner John thornton. The charity kitchen established by Higgins and Thornton is an example of the humanitarian cooperation suggested by Gaskell to overcome class differences.

Such a fine analysis you have offered us here bilinda about Margaret Hale's character ! Indeed I always saw her as unifying the bourgois class and aristocratic class (or what is left of it with the industrial revolution), as you have mentioned. In fact, if we compare Gaskell to other writers like Jane Austen, who offer quiet a conflictual relation between these previously mentioned classes by refusing inter-class marriages, we come to realize that Gaskell does the absolute contrary by describing -if not proposing- a reconsciliated relation. She just artfully threw light at both classes' problems and differences trying to find a common ground for both.